A meditation on the warp and weft of militarism 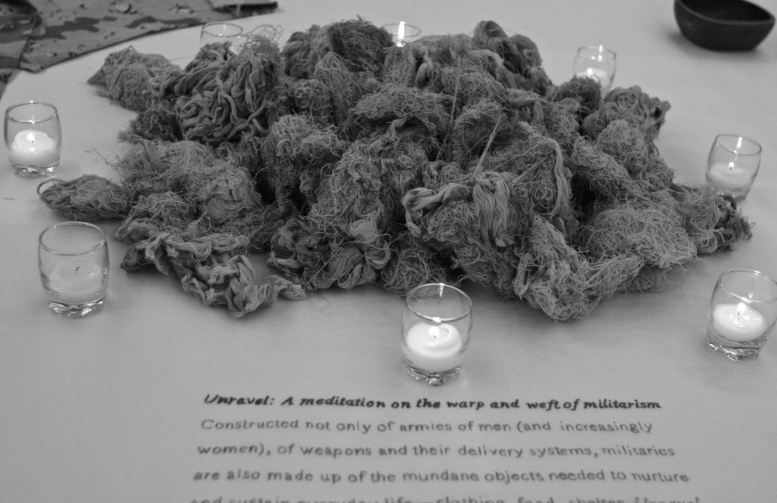 Constructed not only of armies of men (and increasingly women), of weapons and their delivery systems, militaries are also made up of the mundane objects necessary to nurture and sustain life—clothing, food, shelter. Unravel is an embodied inquiry into the loss and fragmentation that results from the violence of war, and into the relationship between gestures of care and the potential for empathetic connection within the context of anti-militarist struggle. Through its seam-by-seam, thread-by-thread deconstruction of a military uniform Unravel is part mourning ritual and part meditation on the warp and weft of militarism’s fabric. How do the threads of the military-industrial-complex connect us to one another? What labour might be required for the disentanglement of militarism’s geopolitical fabric? 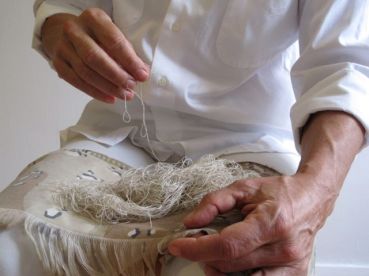 My work employs task-based actions as a means to focus attention and intention. Each gesture is part of a largerinquiry into the intersection of our everyday acts and the affective and publicly situated body in the performance and production of social empathy and into the role of public mourning practices in the construction of narratives of death related to militarism and war. Through embodied action I seek to engage the public body in a dialog about relationships (and lack there-of)—not the intimate and interpersonal relationships of romance, family, or friendship—but the collective relationship of multiply located human beings concurrently inhabiting and manifesting history.

Here’s an article I wrote about Unravel:  Piece/Peace Work: Engendering “rationalities of care” through a thread-by-thread deconstruction of militarism. Performance Research: A Journal of the Performing Arts Volume 18, Issue 2, 2013

One of the many gifts of the festival were the daily visits from festival animator and blogger, Karen Elaine Spencer AKA Dream Listener. I am deeply touched by Karen’s articulations of Unravel: Beginning; Day one; Day two; Day three; Day four; Day five; Day six

Since the festival I have continued to Unravel daily and will be organizing public “unsewing circles.”