Shot at Dawn: Embroidery for the Forgotten Dead of History

At dawn, on 11 November 2013, twenty-five performers stood in the Boulevard front of Toronto’s Queen’s­ Park and the Ontario Legislative Building. Each participant had their hands bound and a blindfold placed over their eyes. Each blindfold was embroidered with name of one of the twenty-five Canadian First World War soldiers who were killed by firing squads made up of their peers, under the orders of their military commanders. As the names of each executed soldier was read out loud, a red X was embroidered onto the small white target pinned over their heart of the performer.

Shot at Dawn is the first of an ongoing series of Embroidery for the Forgotten Dead of History memorial projects that uses embroidery to draw attention to and disrupt narratives produced through the nationalist and militarist commemorative practices which act as frames that inscribe certain events and losses into social memory, while casting “others” (events and populations) beyond the realm of our (dominant) collective memory (Butler 2010). 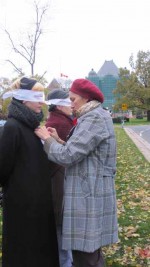