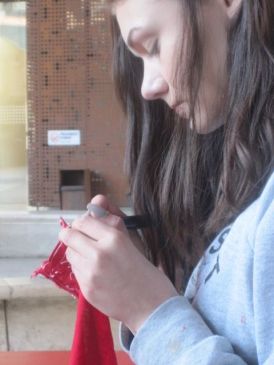 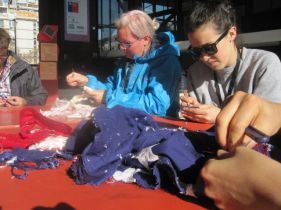 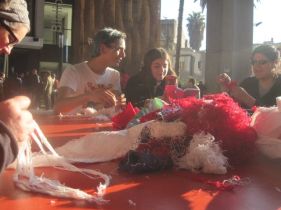 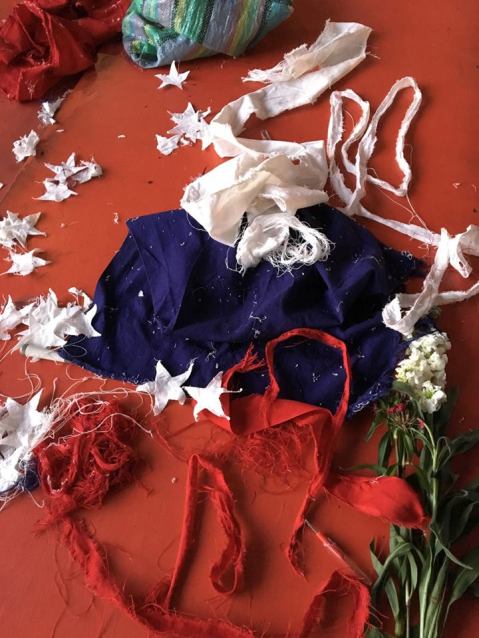 Unbecoming Nationalisms/Nacionalismos Impropios took place on Monday, July 18 at Centro Cultural Gabriela Mistral in Santiago, Chile as part of the Hemispheric Institute’s 10th Encuentro—eX-céntrico: dissidence, sovereignties, performance. From noon to dusk a steady and shifting ensemble of unravellers from across the Americas bent their heads and applied their fingers to the task of deconstructing a US flag. On Saturday July 23, Unbecoming Nationalisms/Nacionalismos Impropios reached its collaboratively conceived and politically and affectively eloquent conclusion when a group of us gathered in front of La Moneda to create the NO+ symbol with the deconstructed US flag and to witness Aubrey D’Vaz Aguilera— accompanied by musicians from the Cuenca Colectivo CUECA SOLA—dance the hauntingly beautiful Cueca Sola.

My deep gratitude to all who unravelled. To all who shared stories, tears, laughter, and strategies for unbecoming nationalisms. To those who took with them deconstructed scraps of the flag so they can continue the subversive (and criminalized) labour of unbecoming nationalisms with friends in their home countries. To CONSTELACIONES, for your support, inspiration, coalitional grappling, and magic. To Roewan Crowe for the impulse to spell out NO+ with the flag’s remains, to Aubrey D’Vaz Aguilera and the Cuenca Colectivo CUECA SOLA for the dance and music, and to all who created the NO+ symbol under the surveilling gaze of Chile’s Carbenineros at the site where Salvador Allende and members of his government were bombed by Pinochet’s military junta on the other 9/11— Sept. 11, 1973. To all the amazing artists, activists, and scholars who made eX-céntrico such a meaningful experience. And to all my colleagues from the Hemispheric Institute and the Canadian Consortium on Performance and Politics in the Americas for making it possible.

As someone who has long resisted participating in nationalist displays, I never imagined I would come to work so intimately with flags. After several years of tactile tactical engagement with the Canadian flag—Impact Afghanistan War, Flag of Tears: Lament for the Stains of a Nation and Oh Canada…—last week I sent in catalog materials for Unbecoming Nationalisms: A Queer Labour of Unproduction, a participatory performance I will be hosting at the Hemispheric Institute’s 10th Encuentro—eX-céntrico: dissidence, sovereignties, performance—in Santiago, Chile (July 17-23, 2016). 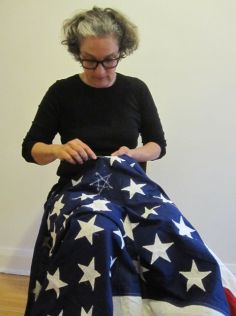 My decision to work with the U.S. flag is specific to the context of Chile where the CIA played key role in the violent overthrow of democratically elected President Salvador Allende. As a Canadian, I would never work this way with the U.S. flag here Canada—not because I don’t think that as a global citizen I have the right to critique the U.S. in its role as a imperialist superpower, but rather because I’m all too aware of how Canadian’s popular pastime of critiquing U.S. domestic and foreign policies is used to shore up Canada’s myth of national innocence.

When the CIA helped overthrow Chile’s democratically elected socialist government, they paved the way for decades of un- and under-regulated neoliberal capitalist investment. As a report submitted to the Inter-American Commission on Human Rights notes, “70 percent of mining activities in Latin America involves Canadian companies” (4). The report goes on to present case studies that link Canadian mining to the forced displacement of indigenous populations, the criminalization of social protest, environmental degradation, adverse economic effects and health consequences, and violent deaths and serious injuries to mineworkers and opponents of mining projects.

In addition to the U.S. flag, when I go to Chile, I will bring a Canadian flag embroidered with the text Canada, Mining the Open Veins of Turtle Island, Latin American, and beyond… and invite my Canadian colleagues to join me in a protest in front of the Canadian owned mining company Barrick Gold’s Santiago office.